How Swachh is Bharat two years on?

October 2 marked the second anniversary of the Swachh Bharat Mission (SBM), the Government of India’s (GoI) flagship programme to achieve the goal of total sanitation by 2019. We bring to you findings from a recent study by Accountability Initiative (AI) at CPR, which analyses what has been achieved over the past two years. AI conducted a household survey of 7500 rural households in 10 districts spread across five states (Bihar, Himachal Pradesh, Madhya Pradesh, Maharashtra and Rajasthan) in December 2015. In the conversation below with Yamini Aiyar, Avani Kapur and Vikram Srinivas, we unpack the reality on the ground.

Where are we after two years of the Swachh Bharat Mission in rural India?

Yamini: Let me start by laying out what we have achieved. I think one of the most important things that we achieved on 2 October 2014 with the photo-ops of the Prime Minister and other senior government officials sweeping the streets of Delhi, and the announcement of making India open defecation free by 2019, is that for the first time the political establishment staked their political capital on achieving sanitation. For those of us who have been following sanitation policy for a while, this was a very significant change from the past when sanitation was largely ignored. This change is also very visible on the ground. In every single district that the AI team works in or has travelled to over the past two years, the entire administration is talking about the need to implement the Swachh Bharat Mission. The political pressure at the top has made sanitation a key implementation priority in the districts.

Another important change is a shift in rhetoric about the intended target and goal of the programme. One of the biggest limitations of sanitation policy, now widely acknowledged, is the belief that toilet construction alone will lead to achieving sanitation. Rather, sanitation is about behaviour change that can lead to creating an open defecation free environment.

Lastly, there is  some movement towards measurement–the GoI’s Drinking Water and Sanitation Department has recently made public data from the NSSO (National Sample Survey Organisation) survey  on sanitation, including an attempt to rank  districts on the basis of open defecation free declarations. There are many flaws in these measurement efforts. However, the fact that an effort is being made to pursue third party measurement is an important first step.

Thanks for sharing the achievements. Given this shift in policy environment, do we actually see a change on the ground?

Yamini: To understand this, AI conducted a sample survey of 7500 households in 10 districts spread across five states to study the process of implementation of the SBM. The original idea of the survey was to draw on households that have reported to have constructed toilets as claimed in the data made available by the Swachh Bharat Mission Portal on its Management Information System (MIS). However,  owing to a number of limitations in the current data base a full-fledged audit was not possible. Hence our survey studied the SBM in two ways. 1500 of our sample comprised households whose names featured in the MIS and the remaining were randomly selected.

So what are the data gaps?

Avani: As Yamini mentioned, we had hoped to track villages, households and habitations through the MIS data, but unfortunately, the quality of the data did not allow us to do so. For instance, census codes were not provided making it difficult for us to match village names, habitation names were often misclassified, and in many instances, we were unable to find households mentioned in the list. A closer look at the lists also pointed to a number of duplicate entries (of names and even Aadhaar numbers!).

So can you share findings were from the survey of households, which featured in the MIS lists?

Avani: To begin with we found that featuring in the governments’ MIS is no guarantee that the household actually has a toilet. We found about 29% of the households, which according to the MIS data had toilets, in fact did not have toilets. There were district variations. For instance, Nalanda and Udaipur had the largest gaps between the toilets reported and the actual presence of these as compared to other districts like Satara, where this was not the case.

Second, having a toilet does not mean that it is usable. We found that 36% of households themselves reported that the toilets in their homes were unusable (for reasons such as broken pits, unsanitary conditions etc.); of these, the usability numbers were also lowest in Udaipur and Nalanda. 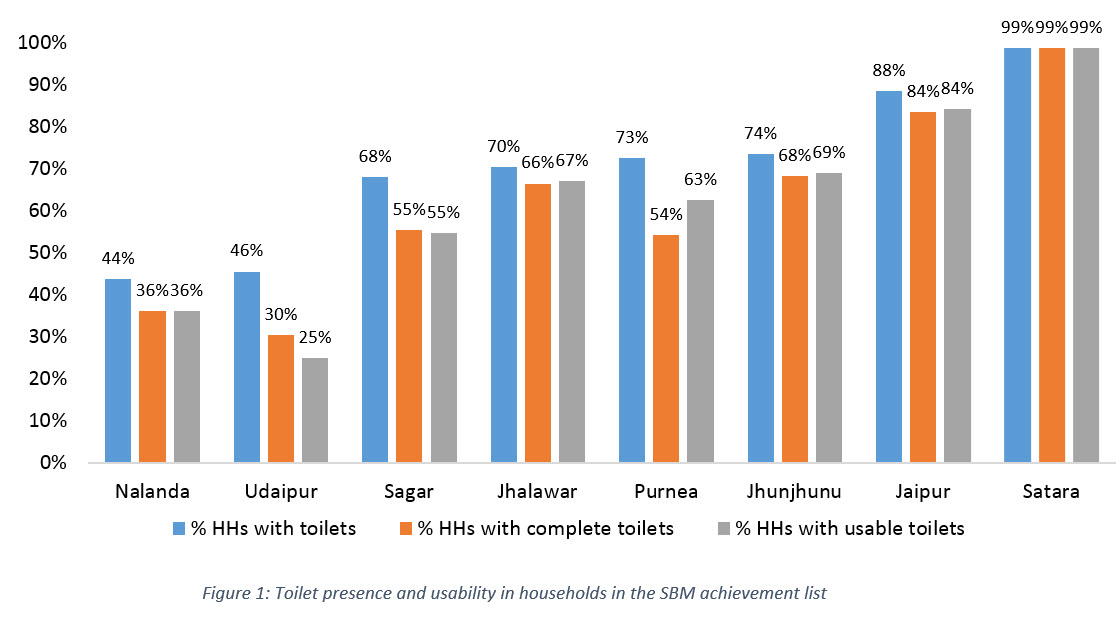 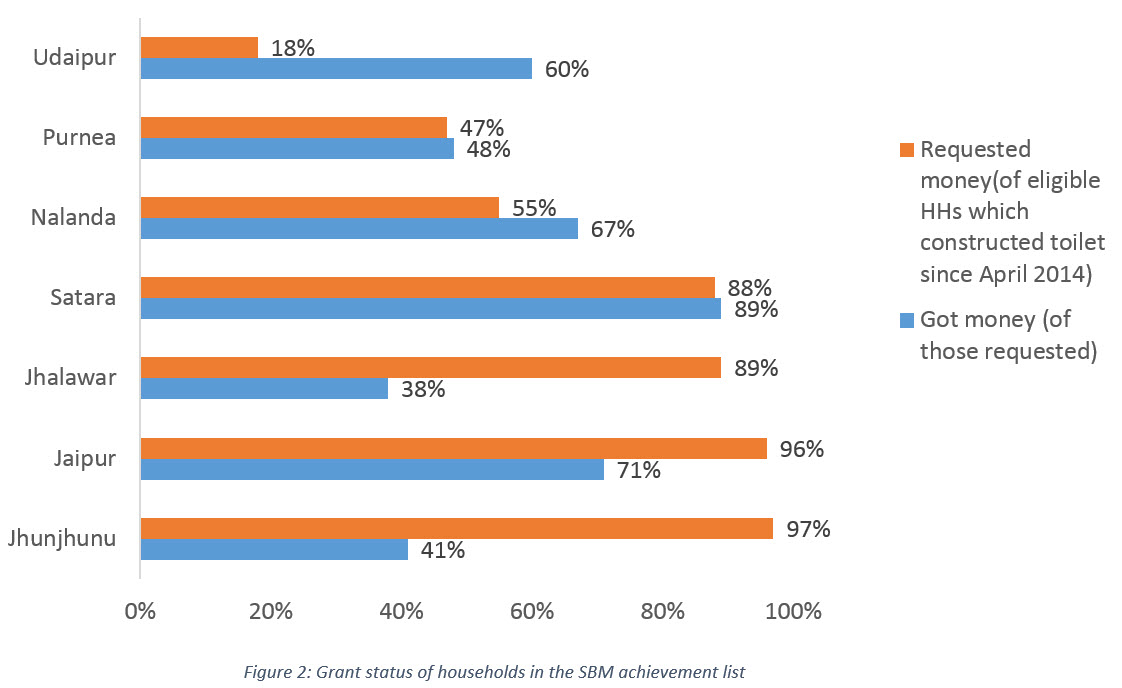 What about the rest of your sample? What can you say broadly about the implementation of SBM?

Yamini: In order for the government to achieve its goal of an open defecation free India by 2019, it set for itself a target of constructing 11 crore toilets. To achieve this, the government has to focus on two critical components: i) the first raising awareness and fostering behavior change; ii) facilitating/ supporting toilet construction.  We assessed the implementation of the SBM from both these aspects.

Our most startling finding is that despite the policy rhetoric, the ceiling of expenditure on awareness raising had dropped from 15% under the previous Nirmal Bharat Abhiyan to 8% under Swachh Bharat Mission. A closer look at the expenditure data also showed that this money was largely unspent across most states. Expenditure on Information Education and Communication (IEC)–government parlance for awareness programs–decreased from 8% of total expenditure in 2013-14 to 1% in 2015-16.

This lack of focus on awareness raising is very visible on the ground. For instance: an important innovation introduced under the SBM was the creation of a cadre of volunteers known as Swachhta Doots responsible for spreading door to door awareness; yet only 6% of the households surveyed were aware of these Swachhta Doots. Further, only 10% reported having any knowledge of the Panchayat Swachhta Samiti–this being the case even though Panchayats have been conceptualised to play a crucial role in ensuring local buy-in. Similarly, only 10% reported that awareness programmes on sanitation were conducted in their villages, while a mere 3% of the households reported being visited by a government official to explain the benefits of the programme.

All of this may seem counter intuitive, as anyone who has travelled around India would have noticed that nearly every village wall has a painted symbol or slogan of the Swachh Bharat Mission, and there is a buzz amongst officials across all districts we visited. Yet our survey shows that this buzz is still to translate into action on ground.

One important issue that we noticed during our field work is that districts are following standardised templates provided by the central government on how to build awareness. There is very little focus on building more local and direct engagement with the people involving actors like Swachhta Doots. It is equally important to create a concerted focus on the public health consequences of sanitation and hence the need for toilets. That is an important missing link–both administratively in terms of coordination between health and sanitation departments, as well as in terms of the messaging. The point needs to be driven home that the ultimate benefit of an open defecation free environment is ensuring quality public health outcomes.

Avani: The second critical component, as mentioned by Yamini, is the construction of toilets. Even today, two years into the programme, the lack of overall coverage of toilets and the continued presence of open defecation is a serious issue. Our survey found that only 37% of households had toilets in Jhalawar, 27% in Udaipur, and 58% in Jaipur in Rajasthan. Similarly, coverage was 23% and 33% in the districts of Nalanda and Purnia in Bihar respectively, and 40% in Sagar in Madhya Pradesh.

Yet, the picture is not all bleak. The pace of construction  has undoubtedly accelerated in the last two years (since April 2014) with specific targeting of those districts, which had low toilet coverage according to Census 2011. For instance, in a district like Jhalawar, which only had 7% coverage in Census 2011, 81% of the toilets today have been built in the past two years. 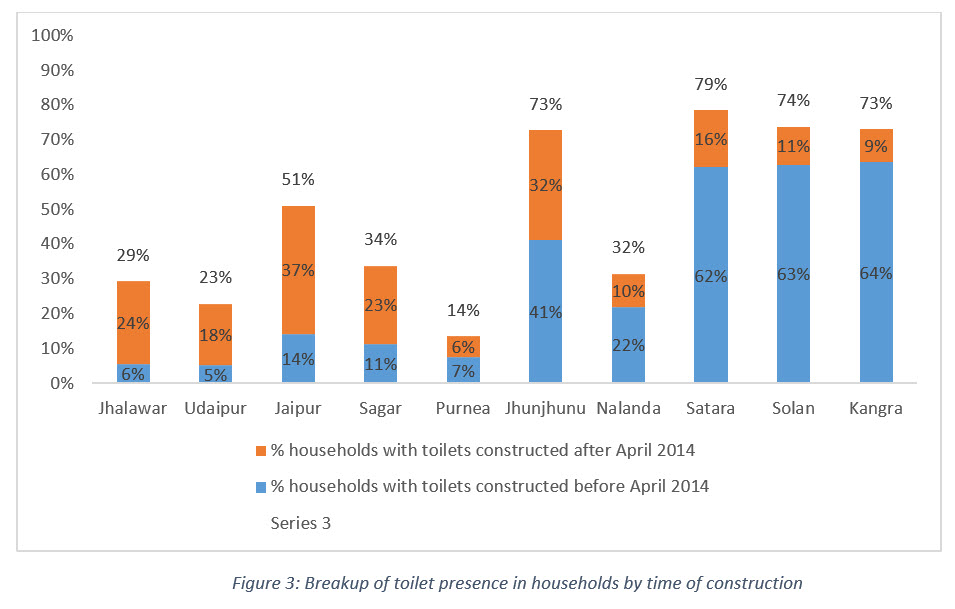 However, there is an interesting observation here. Most people built toilets without government assistance: only one-fourth of the households that constructed toilets in the past two years received government grants. Further, the average cost of construction in most districts (except Sagar and Nalanda) was between Rs. 20,000–40,000, while the government grant is for only Rs. 12000.

Thanks for highlighting the issues with awareness raising and toilet coverage. But what about usage? This has often been mentioned as a critical lacuna in sanitation drives.

Vikram: It is encouraging to observe that with the exception of three of the districts we surveyed, most people who had toilets did use them. However, in the districts of Udaipur, Nalanda and Sagar, usage continues to be a problem despite the presence of toilets. For instance, 26% of households in Udaipur, 17% in Sagar, and 13% in Nalanda reported that at least one member of the household defecated in the open despite having a fully constructed toilet.

Yamini: An important thing that the usage data highlights is how difficult it is to actually track usage! We spoke to a number of sanitation experts before designing the usage question since the way you ask, how you ask, whom you ask, and how often you ask can all have consequences on the responses you may get. According to many experts, and even in our own experience, the best way to track and understand usage is through a deeper, qualitative case-study based approach. This may necessitate a different approach to monitoring.  Usage may not be trackable through large scale surveys. Rather the government will need to build networks with anthropologists, sociologists, political scientists and others familiar with qualitative surveys to track usage effectively.

Based on your findings and understanding of the situation on the ground, what is the way forward to realise a Swachh Bharat?

Avani: Let us summarise what we recommend based on our survey findings:

To aceess the presentation on the full summary of the findings, click here.